Demonstration, documentation, and evaluation at the Westland site 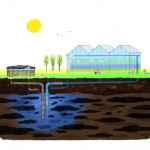 Like in 2015, the Westland demosite for aquifer storage and recovery in combination with reverse osmosis (ASRO) still is a unique site to demonstrate, document, and evaluate this water innovation.

Plenty of scientists, policy makers and water users find their way to the site. For instance, a meeting was organised together with the Rabobank (financing most Dutch horticulturists) at September 16th. During this meeting interested agriculturists from the area visited the site for presentations on the technique, but also on interesting ways to finance this type of sustainable innovations. A delegation from Vietnam was welcomed on October 13th, while on October 24th delegates from the Gulf Cooperation Council visited the site to explore its potential for the Gulf States. Both regions suffer from saline groundwater and a lack of storage opportunities aboveground. These latter visits were arranged together with the Netherlands Enterprise Agency (RvO).

Having a demosite also enables documentation of the real-world functioning of innovations. For instance, the contribution of the ASRO to the additional (on top of the rainwater stored in aboveground reservoirs) water supply of the greenhouse was examined. In 2016, most of the required high-quality irrigation water was supplied by ASR, which means it was rainwater that could be directly used for irrigation after aquifer storage. Around 25% of the irrigation water was produced by desalinating the mixed brackish water/rainwater, abstracted fromthe Freshkeeper well. During longer droughts, additional freshwater was produced with the RO-system that formerly provided all of the additional water by desalinating brackish water. This system also uses a mixture of rainwater and brackish water for RO now. 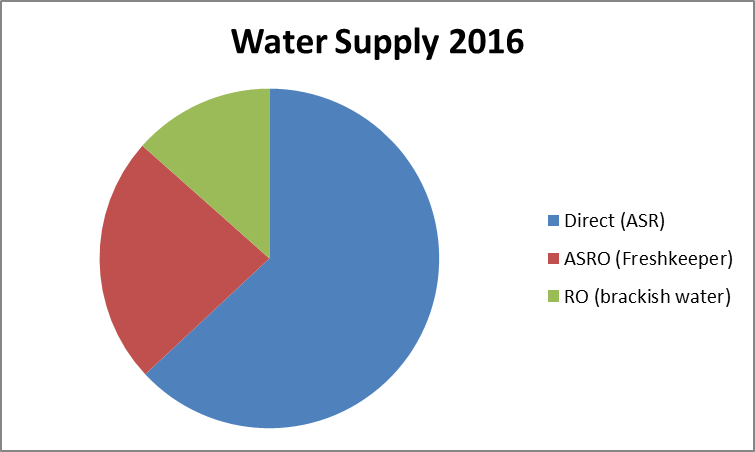 Water supply to the prominent greenhouse in 2016.

Example of model outcomes: Cl-distribution after 30 years of ASRO at the pilot site.