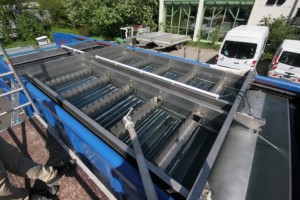 Over a century ago, the Emscher region was transformed into an industrial conurbation with heavy industry and the Emscher and its tributaries were turned into a man-made system of open wastewater channels. With the decline of the mining industry, the river and its tributaries are being re-converted into natural waterways. As part of this re-conversion, a total length of about 400 km of sewers and 290 combined sewer overflow (CSO) structures with a total volume of 485.000 m³ have been and still are to be built until 2017.

What is being tested?

DESSIN will work on innovations in treatment of CSOs as well as real-time control (RTC) of large-scale sewer systems to support the Emscher re-conversion process. This will facilitate the WFD implementation for this heavily modified water body and will contribute to the increased value of ecosystem services (ESS).

SEGNO is providing the ADESBA RTC system which enables communication between single CSO facilities with the aim to utilize the total storage capacity. During the demo phase, ADESBA will be implemented in part of the sewer system in the Emscher area. Again, the CSO load reduction potential will be assessed by UDE. Here is a short movie about the demonstration of the ADESBA real-time-control system: