Llobregat River is located in the North-East of Spain with a typical Mediterranean climate. The total length of the river is 170 km and the surface of the river basin is 4948 km2. Administratively, it is located in Catalonia region, and the management is carried out by the Water Catalan Agency. The river basin is characterised by irregular and heavy rain periods, followed by periods of severe droughts which occur in an interval of 8 – 10 years. Different pressures appear along the course of the river. While in the upper course it is characterised by the high quality of water and biodiversity, this worsens gradually due to anthropic activities. Several valuation studies have been conducted in the river basin, such as drinking water provision, sediment retention, energy production and water purification. 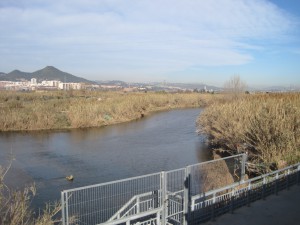 Two projects carried out in the Llobregat lower valley and Llobregat Delta have been selected as a mature cases. (I) Hydraulic Barrier against sea water intrusion to remediate and mitigate the effect of groundwater abstractions in the sea water intrusion and (II) Infiltration ponds in the Llobregat lower Valley. The system consists mainly of two ponds, settling pond of 6000 m2 (reduction of sediments) and infiltration pond of 5600 m2 (percolation in the aquifer). The hydraulic barrier has injected 9 Mm3 and the infiltration pond has recharged 4 Mm3, which is a significant additional volume in the aquifer. The assessment of the improvement in Ecosystem Services will be done in the DESSIN project.